Skip to main content
You have permission to edit this article.
Edit
News
Weather
Sports
Calendar
Announcements
Connect With Us
Contests
1 of 3 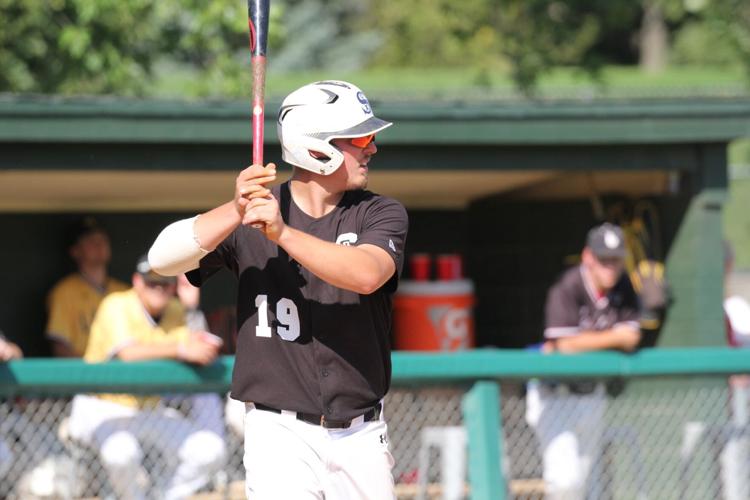 Alexandria's Travis Krueger hit two homeruns and drove in five runs in Sunday's loss to Sobieski.  He also hit one in the 6-1 win over Waconia. 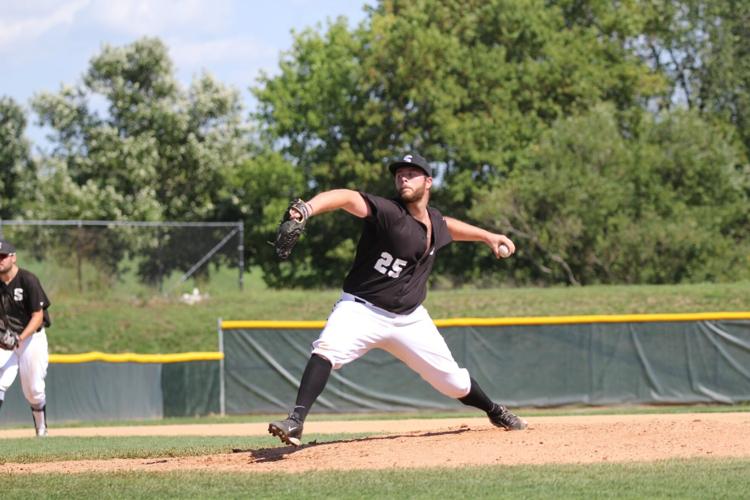 Blake Stockert had a strong complete game performance in Alexandria's 5-3 win over Maple Lake on Saturday. 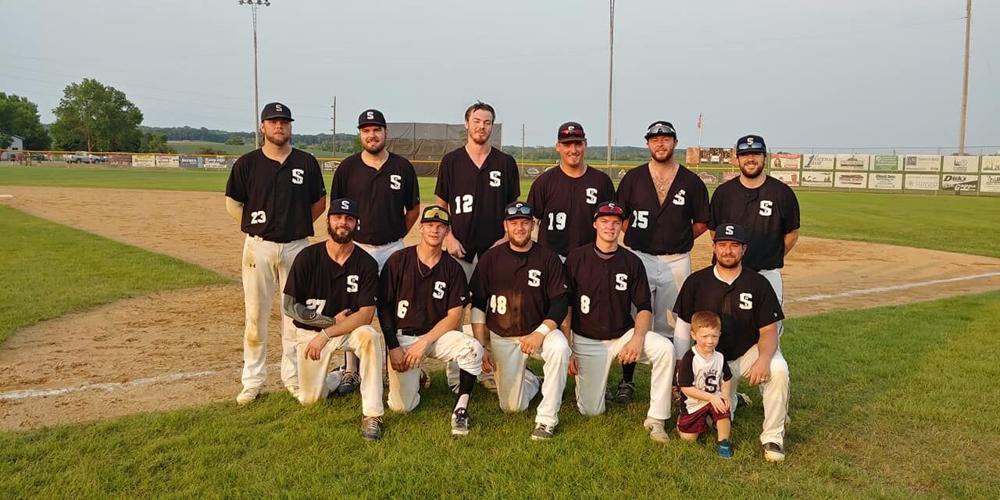 Alexandria's Travis Krueger hit two homeruns and drove in five runs in Sunday's loss to Sobieski.  He also hit one in the 6-1 win over Waconia.

Blake Stockert had a strong complete game performance in Alexandria's 5-3 win over Maple Lake on Saturday.

(Waconia, MN) Alexandria's Travis Krueger hit two homers and drove in five runs in Sunday afternoon's final four game against Sobieski but it wasn't enough as the Skis held on for a 9-6 win to advance to Sunday's tournament final.

The Skis amassed 17 hits, scoring runs in five different innings. The Skis were a veritable hitting machine, constantly putting the ball in play. Of Sobieski's 47 plate appearances, only four resulted in strikeouts.

Jake Kapphahn, Sobieski's No. 8 hitter, had a perfect game at the plate going 3-for-3 with a home run, a walk and a sacrifice bunt. Dusty Parker, hitting just ahead of him, also had three hits. Like Kapphahn, he also scored a pair of runs. Ben Hanowski and Josh Wenzel also scored two runs apiece. Hanowski went 2-for-4 and Wenzel 2-for 5. Both hit doubles during the game.

The Black Sox got on the board first as Krueger hit a two-out, two-run shot off Skis' starter Ethan Branum, draftee from the Fort Ripley Rebels. Neither run was earned, as the first hitter, Chris Curry reached on an error and was forced on a grounder by Matthew Carlsen, who scored on the dinger. The Skis answered with two runs on four hits in the second frame, led by Hanowski's two-bagger.

Wenzel's double led off the two-run fourth inning. Parker then found the hole between short and third. Kapphahn's knock to left plated Wenzel. Backstop Riley Hirsch dropped down a sac bunt and Beau Hanowski singed up the middle to knock in Parker. That gave Sobieski a 4-2 lead. Alexandria cut it to 4-3 on hits by Shawn Krueger and Colin Erickson.

Kapphahn's one-out solo shot in the top of the sixth made it 5-3. Then the Skis broke it open with three more runs in the seventh as the bottom of the order continued to inflict damage. The resulting 8-3 lead appeared safe, but Parker and Hirsch combined for one more insurance run in the top of the ninth.

Brett Savelkoul led off the bottom of the ninth for the Black Sox with a single to left. Branum then fanned Sox leadoff hitter Curry with his 103rd pitch for the first out. A fielder's choice brought the second out. Black Sox catcher Mitch Thompson singled to put runners at first and second. Krueger hit Branum's 0-1 pitch out of the park to put the score at 9-6.

Brady Burgau's double in the left-center-field gap ended Branum's day. Chad Weiss, winner of the Skis' noon game against Sartell, took over on the mound.

Shawn Krueger worked a full count and drew a walk. As Krueger was trotting to first, Burgau started toward third. Hirsch fired the ball to third baseman Ben Hanowski and Burgau was caught in a rundown to end the game with the potential tying run in the on deck circle.

Branum finished with 125 pitches over 8 2/3 innings. He hit one batter but walked none and recorded five strikeouts. He gave up four earned runs and a dozen hits to earn the win. Despite walking the only batter he faced, Weiss picked up the save.

Dylan Haskamp, a Sauk Centre draftee, threw 100 pitches for the Sox. He struck out three and walked only one, but the 11 hits he allowed spelled loss for him.

The Skis take on the Watertown Red Devils at noon Monday in Waconia to determine the 2021 Class C state champion.

Two-out hitting and gutsy pitching proved to be a formula for success Sunday afternoon as the Alexandria Black Sox downed the Waconia Lakers in front of a large crowd of mostly Lakers' fans by a score of 6-1 at Lions Field in Waconia.

Travis Krueger hit a three-run homer in the bottom of the fifth. He had two hits in four at-bats, scored twice, and batted in three to take player of the game honors. Mitch Thompson went 2-for-3 with a double and a walk. Brady Burgau and Eric Carlsen each had two hits apiece also for the Black Sox, who advanced to meet Sobieski in the semifinal round.

The Lakers scored first. With one out in the top of the third, Ben Smothers drew a walk. Jack Stoddard doubled him in on a shot that hit the fence in left-center on the fly.

In the bottom of the fourth Alexandria struck back with two runs on four hits.

Carter Savelkoul led off the fifth with a single. Two outs later Mitch Thompson hit a come-backer for a single, setting up Krueger's three-run shot.

The Black Sox added one more in the sixth on two hits and a Waconia error to complete the scoring. All six of their runs came with two out.

Stockert walked four and hit four. He allowed only three hits over seven innings. He struck out five in his 137-pitch outing. Dylan Haskamp, a draftee from Sauk Centre, followed with two hitless, scoreless innings in relief. He walked one and fanned two.

(Chaska, MN) Eric Carlsen came up big in his final two at-bats to lead Alexandria to a 5-3 comeback win over Maple Lake.

The Black Sox right fielder scored the go-ahead run, breaking a 3-3 tie, in the bottom of the seventh inning off an RBI double by shortstop Chris Curry to the left field wall. Carlsen singled to lead off the bottom of the inning.

He struck again in the eighth inning on an RBI single with runners in scoring position, bringing Colin Erickson home for a 5-3 lead. Carlsen went 3-for-4 with two RBI and a run scored.

Maple Lake started off with a bang as Lakers left fielder Donnie Mavencamp hit a two-run home run over the left field wall in the first inning for a 2-0 lead. The Lakers’ lead lasted only two innings as Alexandria bounced back to score a run in the second inning and another two in the third.

Logan Orazem tied things up for Maple Lake 3-3 in the top of the sixth inning on a sacrifice fly, scoring Ben Goelz.

Maple Lake threatened in the bottom of the seventh inning when Ben Clapp stole second and advanced to third amid fielding errors by the Black Sox. Left fielder Brady Burgau kept the Lakers from breaking the tie when he made a diving grab for the third out.