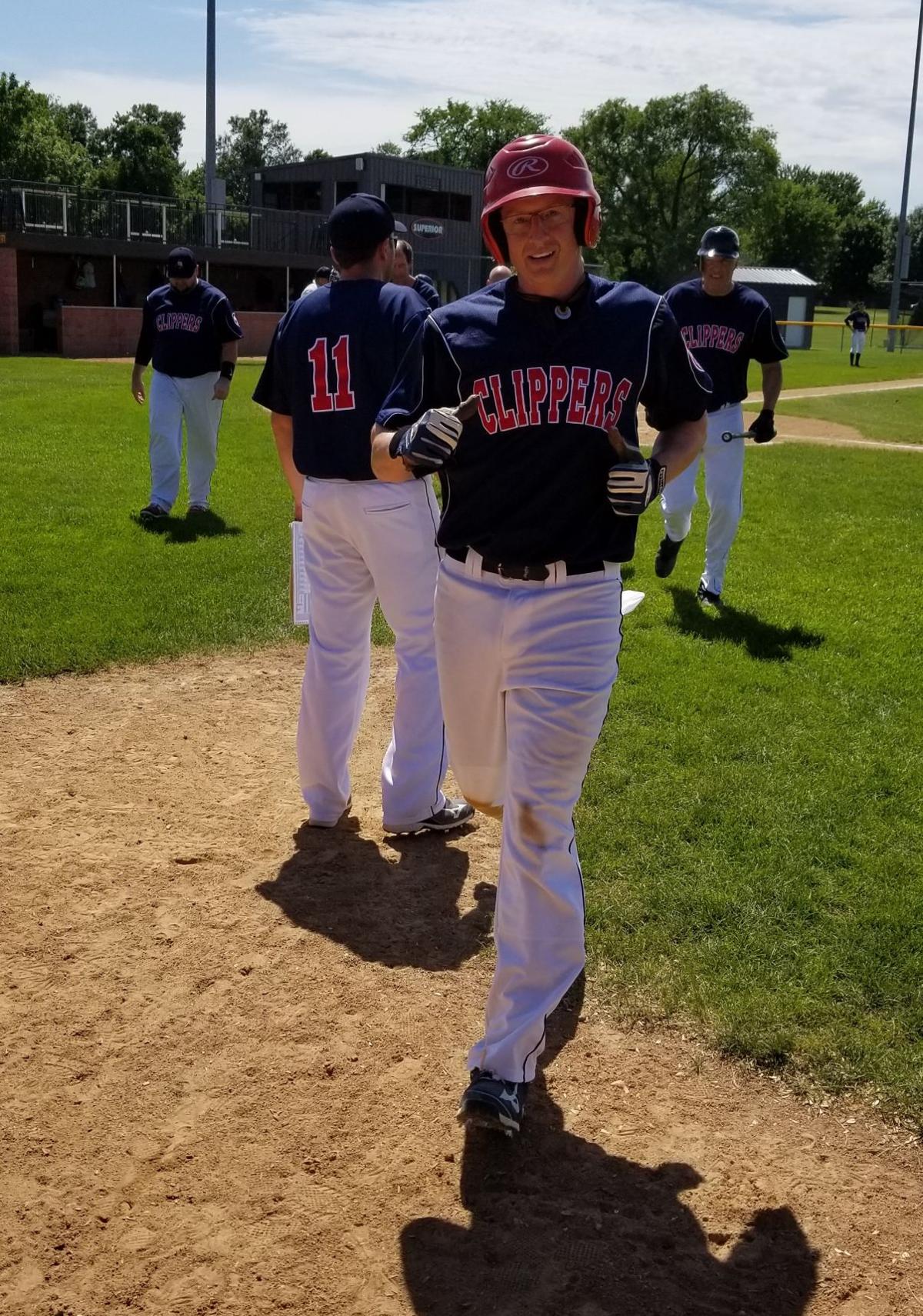 Alexandria Classic Clipper Jerrod Kelley jogs back into the dugout after hitting a 2-run HR in Morris on Saturday, July 13th.

Randy Roers came in relief during the second game of a doubleheader in Morris and got the win for Alexandria.

Alexandria Classic Clipper Jerrod Kelley jogs back into the dugout after hitting a 2-run HR in Morris on Saturday, July 13th.

Randy Roers came in relief during the second game of a doubleheader in Morris and got the win for Alexandria.

(Morris, MN) After a five-inning 14-0 shutout of the Morris Brewers in over-35 Senior Men's baseball, the Alexandria Classic Clippers had to rely on two big rallies to claim the second win in the doubleheader.

In game one, Greg Serum kept Morris in check with only three hits.  Morris runners reached as far as second base five times, but never plated a run.  Kurtis Kuhn had three hits for Alexandria, including two doubles.  He scored each of the four times he batted and provided a number of great defensive plays behind the plate.  Jesse Flaten recorded a couple of hits and three RBIs.  Jerrod Kelley moved the score to 11-0 with a 2-run homerun in the third inning.  Randy Roers and Jon Brundell each also recorded hits for the Clippers.

In game two Joe Korkowski started on the hill.  A combination of walks, errors and timely Morris hits allowed them to claim an early 7-2 lead after only two innings.  Korkowski did manage five strikeouts in his three innings of work.  Alexandria added one run in the third and two more runs in the top of the 4th, making the score 7-5 Morris.  Randy Roers came in to pitch for Alexandria in the bottom of the 4th, keeping Morris scoreless.  In the top of the 5th Mike Weber helped provide the tying run with a great bunt with two strikes on him.  The throw to first allowed Korkowski to score from third base. Alexandria scored five times that inning to gain a 10-7 lead, but not for long.  Morris came roaring back in the 5th with four more runs to reclaim the lead 11-10.

Weber led off the top of the seventh with a walk.  Jerrod Kelley moved him to second base on his third hit of the game.  Weber tied the game scoring on a hit by Randy Roers.  Jeff Hook provided the game-winning run with a hit, scoring Kelley.  Roers scored on a throwing error, capping off the scoring 13-11.  Morris had the game winning run at the plate in the bottom of the seventh, but a pop-up to shortstop ended the threat.  Alexandria recorded 13 hits in the game.

Alexandria moves to 7-2 on the season and will host the Urbank Goldtimers on Saturday, July 20th at 4:00pm.