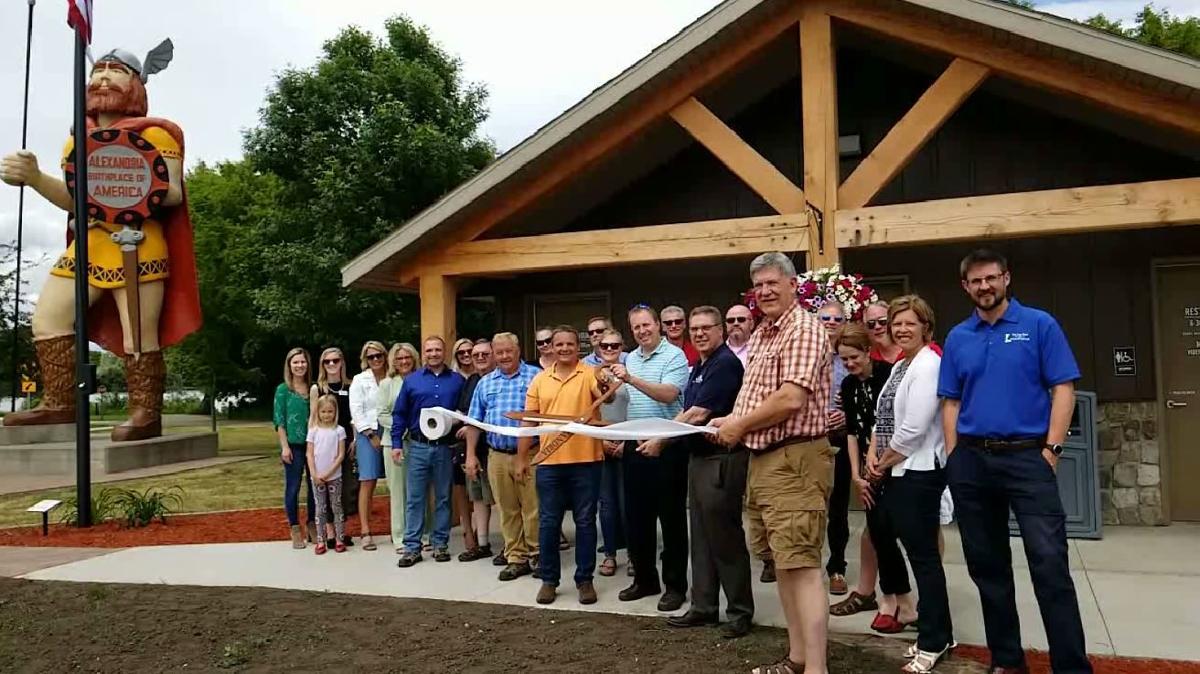 The Alexandria Rotary Club recently donated a dock on the south side of Lake Agnes in Big Ole Central Park.

The Alexandria Rotary Club recently donated a dock on the south side of Lake Agnes in Big Ole Central Park.

(Alexandria, MN) It was a fitting way to commemorate the official opening of the public restrooms at Big Ole Central Park.  With city council members, city employees and other community partners present a large roll of toilet paper was rolled out and cut with the city's "official ribbon-cutting scissors".

The following video includes comments from city officials and the ribbon-cutting ceremony.

The area was really just an abandoned rail bed 25 years ago; however, since 2nd Avenue itself was developed into its current form in 2004, much has happened on either side of it to bring more people to the north end of Broadway Street. The restroom is just one small part of the master plan for Big Ole Central Park that really stretches from Broadway Street down to Kenwood Street.  Alexandria City Administrator Marty Schultz says the city council has looked at a number of different options and designs over the years.  Schultz says the city council has had so many requests over the years regarding public restrooms in the downtown area that it's nice to be able to see this one particular project come to fruition.  Schultz feels Alexandria has really "turned its face toward Lake Agnes and everyone has worked together to make this North end into a place you want to go rather than a place you want to avoid."  He says there have been a number of other projects to really enhancing this portion of Alexandria; from the redevelopment projects taking place right now across the street at the old lumber yard, to the Agnes Boulevard project that was completed last year to provide a sidewalk to the Felt Anderson subdivision.

The bathroom project was between $105,000 and $110,000 out of the City's capital improvement fund.  Schultz says it's very similar in size and scope to the one build more than four years ago at Fillmore Park.  He describes a certain finding during construction.

Bill Thoennes is the City Park Director says that they had to expand the hours the new restrooms are open because there are so many people are coming to use the park.  The hours are from 5:00am to 10:00pm each day.  The doors are automatically locked during the off-hours.

ALP Utilities operates a webcam of Big Ole, in the proximity of the new bathrooms. (allow time for webcam connection)