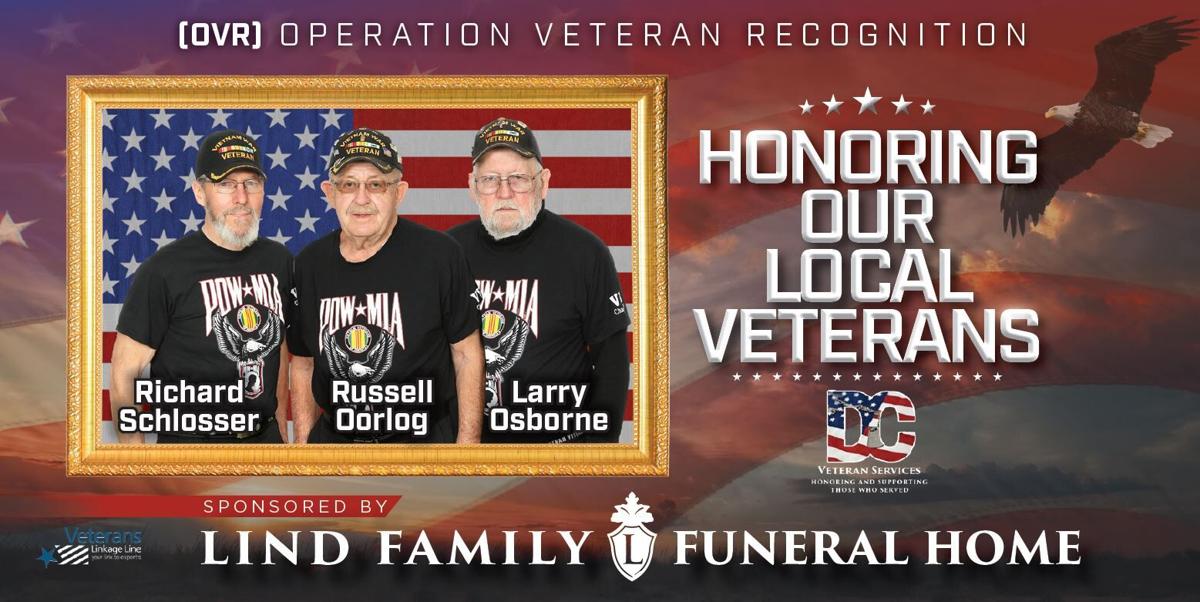 Veterans in the Rifle Squad look on during a June 26th ceremony held at the Veterans Memorial Park.

Veterans in the Rifle Squad fire a 21 gun salute during a June 26th ceremony held at the Veterans Memorial Park.

Veterans in the Rifle Squad look on during a June 26th ceremony held at the Veterans Memorial Park.

Veterans in the Rifle Squad fire a 21 gun salute during a June 26th ceremony held at the Veterans Memorial Park.

(Alexandria, MN) Curt Lind has been around veterans all his life.  His father was a WWII veteran who fought over in the Philippine Islands.  Although he never served in the military himself, he has been serving those who did for decades.  The latest example is his use of the family business' billboard along Highway 29 South, across from the Viking Plaza Mall.  When asked by the Douglas County Veteran Service Officer Jake Turner if he'd consider using the space to honor local veterans Curt did not hesitate.

Jake is not only the local VSO, he is a veteran who served two terms over in the middle east himself.  He was inspired over Veterans Day 2020 to do something for all of the men and women who served and are still with us, contributing.  It was shortly after that thought that he contacted Lind Family Funeral Home.

Finding veterans to honor on the billboard was almost the easiest part.  Many clubs and veterans groups in the area are full over people who have served our country, but more importantly, continue to serve others who have also signed the line and pledged to fight for this country's freedom and democracy.

One of the first name to come forward was Russ Oorlog.  Russ was born in South Dakota.  He was the middle of three sons.  His father was a Colonel who served in WWII.  When 1966 came around Russ knew what was likely to happen.  With three young men in the family, he was the one picked to serve our country and Vietnam was the place where he was tested on many levels.  Much of his story from those nearly three years of service in the U.S. Army was captured on camera.  Reels of pictures taken from that conflicting time in American history were destroyed, never to be seen.  Russ's father told the returning veteran you don't need those pictures and now, decades later, Russ agrees.   Russ was a leader in combat and he has been a tremendous driving force in the movement to properly honor veterans in the Alexandria Lakes Area.  Most notably is the newly constructed Veterans Memorial Park.  It was the brain child of Oorlog and several other area veterans.  Russ was continually asking, volunteering, suggesting, questioning and fundraising.  In the end, more than a million dollars in donations, both monetary and in-kind came in and the park is now complete.  Additional plans are in the works from the City Park Department for a play area nearby for kids, but the VMP itself is done.  Russ is also part of many tributes and ceremonies for fallen veterans.

Richard Schlosser grew up in Miltona.  In fact, he lives on his family farm.  He was in the Army from 1967-1969 and also served in Vietnam.  Richard has been the rifle squad leader for many years and has had the honor of presenting the discharged shell casings from the 21-gun salutes to surviving family members following a military honor ceremony.  He says a protocol that comes from the heart.  The words include "From our great nation I present to you these spent shell casings, from the rifle salute in honor of (deceased person's name), for our country."  Richard says that, "As you age you really realize what you did for your country and being involved in a war and living in a war zone, you definitely know that we have one of the greatest nations in the world."

Larry Osborne came to Minnesota the most indirect way.  He was born in Indianapolis, Indiana.  He also joined the Army in the late 1960's.  Osbourne was stationed in Kentucky, Missouri, Hawaii, and lastly in Vietnam.  He made E5 there and found himself having to go out and set up night ambush controls but says he was lucky because he was in very few fire fights.  He says, "You done what you had to do to stay alive.  There was things that I done that I wish I hadn’t of had to do, but, you just, you’re asked to go and do a job, if you can’t do that job, then, you have no business being in the military."  Today Larry is the coordinator for military funerals in the area.  He works with the local funeral homes, along with the color guard and rifle squad.  He says he really enjoys working with our veterans.