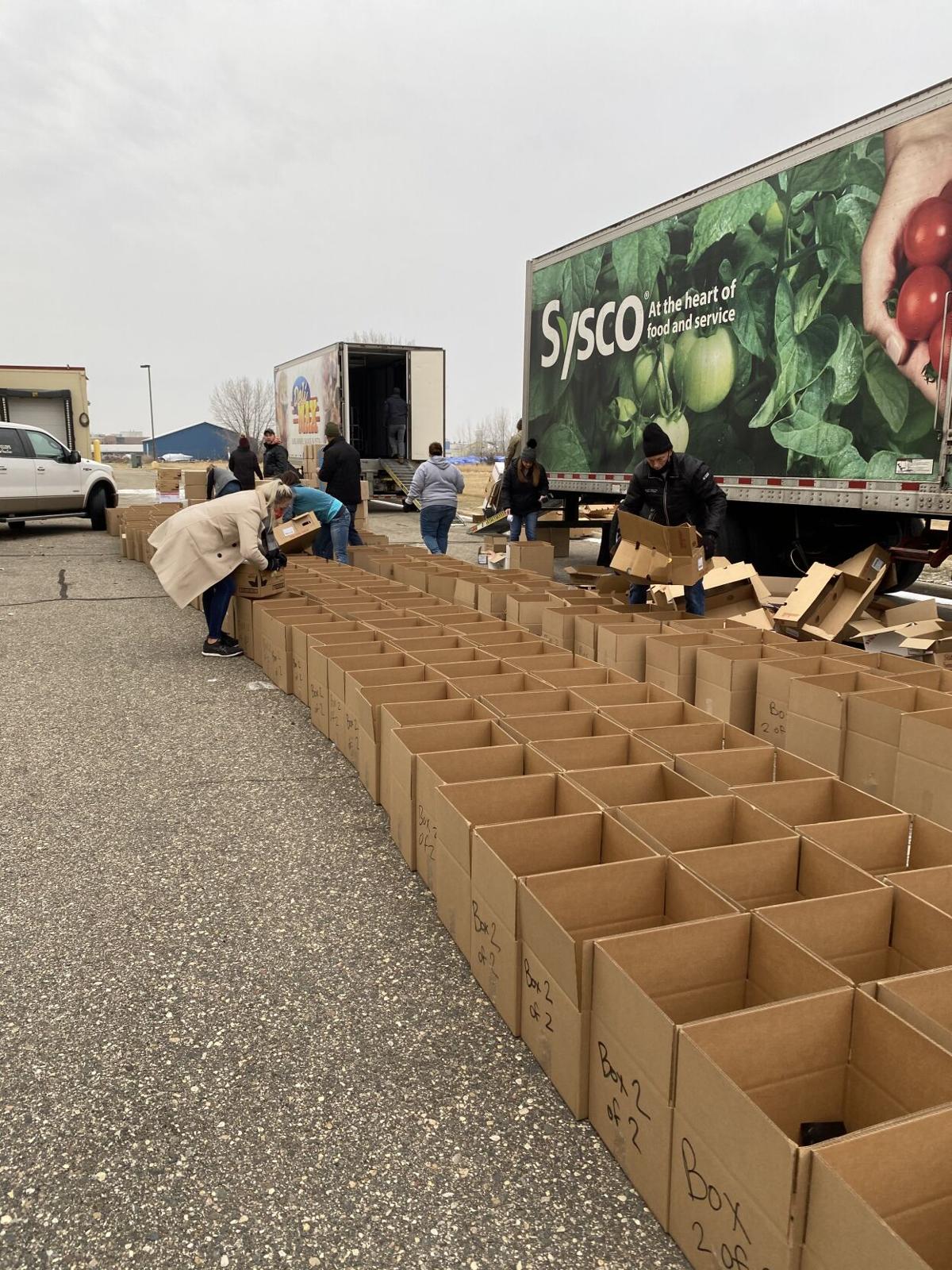 Alexandria's Unity Foundation led the effort to help restaurant workers.  The boxes were lined up to fill for employees affected by the shutdown in late 2020. 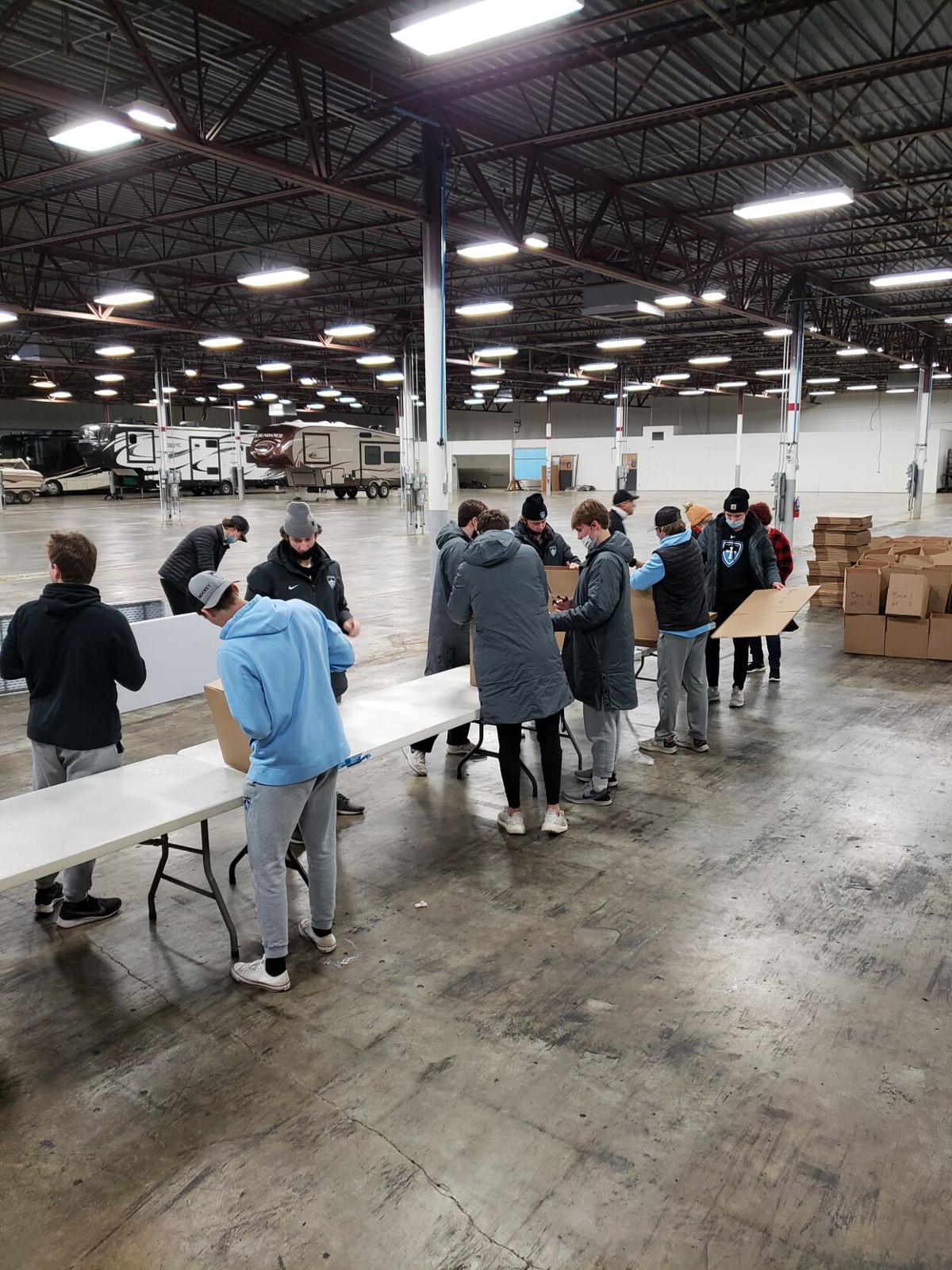 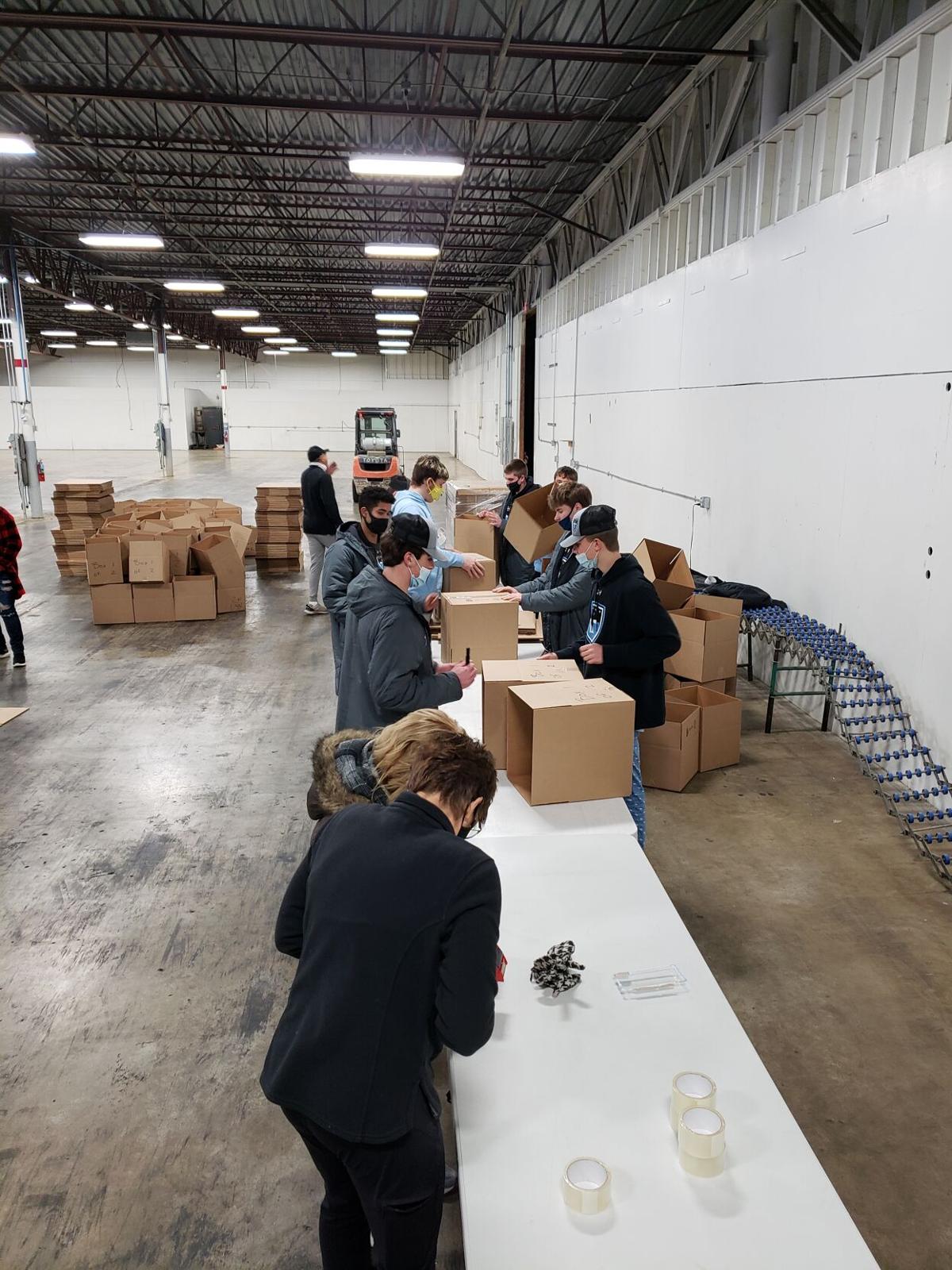 Alexandria's Unity Foundation led the effort to help restaurant workers by providing them with a box of food and some gift cards. 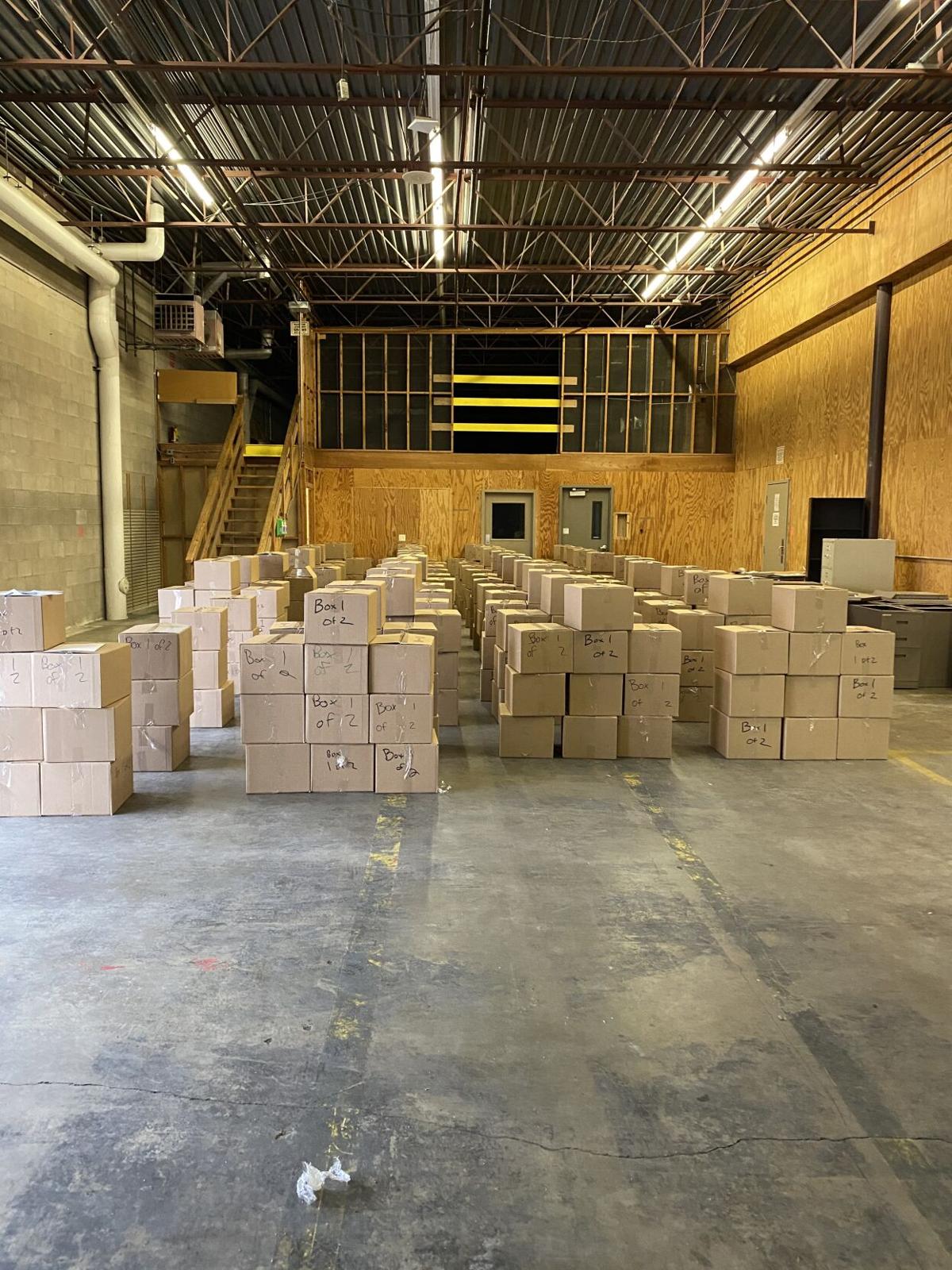 Alexandria's Unity Foundation led the effort to help restaurant workers.  The boxes were filled up for employees affected by the shutdown in late 2020.

Alexandria's Unity Foundation led the effort to help restaurant workers.  The boxes were lined up to fill for employees affected by the shutdown in late 2020.

Alexandria's Unity Foundation led the effort to help restaurant workers by providing them with a box of food and some gift cards.

Alexandria's Unity Foundation led the effort to help restaurant workers.  The boxes were filled up for employees affected by the shutdown in late 2020.

(Alexandria, MN)  It is without question that the bar and restaurant industry has been uniquely challenged by the restrictions imposed in the fight against COVID-19.   Those establishments are not only home to dozens of owners and operators in the Alexandria Lakes area, but hundreds of employees, trying to figure out how to best proceed.

After seeing a post on the Pike and Pint Facebook page Kaylene Schultz, with the Unity Foundation, thought about putting a $30-40 tip in an envelope and dropping it off.  Then, realizing that probably wouldn’t go very far, she thought about a Go Fund Me called, Community Tip Jar in hopes of raising $2,000-3,000. She tried to learn more about whether this would help or not   by calling Kent Kopp of Pike and Pint and the leadership for the area's restaurant association.  The extent of impact was much bigger than that. She then talked to restaurant owners who were concerned about food security for their employees over the holidays.  They shared that they had people getting evicted and/or were asking for advice on what bills to pay. Kaylene says, "It was like I felt God poke my heart and say, 'Do something about this'. These hard-working people have served this community with smiles on their faces for years. I just felt like it was our chance to serve those who serve us."

From there Kaylene called Nicole Fernholz at the AAEDC to find out how many restaurant employees there are in Douglas County. She learned that there are 985, but sadly, earlier this year it was 1350. She felt that even if a third or half had a need, this was bigger than a single go fund me page. She then talked with a member of the Unity Foundation and pitched an idea at the board meeting the next day. Initially she set the goal at $8,750, hoping to get 350 people a $25 gift card. The Board wanted to take action as soon as possible. Tom Schabel is on the Unity Foundation board.  He asked that she do some more research and get back to the board with a real number.  Kaylene then bumped the goal to $16,000. The next day the executive committee met and the board voted to approve a dollar for dollar match up to $15,000. Kaylene says, "It was beyond my wildest expectations. Now we could make a real difference."

In nine days, the Unity Foundation turned a $30-40 tip into $42,500. They called, emailed and messaged restaurants to get a number of employees with a need. Aagard gave them the old Kmart building for a week and helped them find boxes. Kaylene says "It was surreal, we were less than 24 hours away from packing the boxes and we didn’t even have boxes yet." Brent Smith, another board member, was relentless in his pursuit to make that happen and showed up with boxes in tow just as they were ready to begin. The NorthStar Christian Academy released their students early so they could help assemble and pack the boxes. The spouses of the Unity Foundation board members and their bible study groups showed up. Over the two and a half days that they packed and handed out the boxes, the effort included close to 100 volunteers. Douglas Machine delivered water for the volunteers. Thrivent brought coffee, more than 500 t-shirts and volunteers. Cullen’s Home Center, Aagard, Snyder Thornburg Wealth Management all sent volunteers. Alex Brick and Stone loaned them a forklift to get the food off the truck.

The Unity Foundation partnered with the food shelf to buy good quality products and then made a sizable donation to help feed more families going forward. “When we felt there wasn’t enough, Tim Cullen, also a board member, made a phone call to Ron’s Warehouse and within three hours they had a truck at the door with four pallets full of food donations,” says Kaylene. Elden’s Fresh Foods and Lake Country Meats offered discounts on gift cards. Henry’s Foods and Sysco not only donated or gave significant price breaks, but their teams showed up to help pack boxes and deliver to the restaurants.  At the end of the day, each person received 1 box of perishable goods and gift cards and 1 box of frozen food (including a large whole turkey, hamburger and large bags of frozen vegetables.)

The Unity Foundation wanted the restaurant employees to know they are loved and supported, so they included a note of thanks with a few of their favorite bible verses and the Christmas Story on the back. After all, Kaylene says it seemed like a Christmas miracle.

She says she didn’t wake up that one Wednesday morning thinking she was going to be trying to raise over $40,000 to try to bless 500 people in our area, but, "when God puts something like that on your heart, you don’t doubt the how – you just know He will align everything and He did. Every time I started to panic a bit thinking I had bitten off more than I could chew, I tried to pivot that feeling into one of trust and knowing that I was simply his hands and feet."

The Unity Foundation and the volunteers really wanted this to feel like a gift, so they asked the restaurant owners to pick up the gift boxes for their employees and distribute to them at work.

They had a goal of reaching 500 employees and they did. Unity Foundation board members Tim Cullen and Vern Anderson hopped in a truck and visited several of the restaurants who they weren’t able to connect with and left gift boxes with them until the supply ran out. Kaylene says she knows they couldn't have reached everyone with a need but she is currently coordinating a second round effort, to go back to them with some donations that came in after the fact.

Kaylene and Unity Foundation board member Brent Smith talked with KXRA's Joe Korkowski and Patty Wicken during the Jan. 8th Openline program about the effort (AUDIO BELOW):